Which invention was submitted for a patent on valentine’s day of 1876?

On February 14, 1876, a patent application was filed for the telephone by the putative inventor of the telephone, Alexander Graham Bell.  However, earlier that morning Mr. Elisha Gray applied for a patent on a variable resistance communication device.  A dispute soon arose as to who had the right to patent the original concept.  According to some, Mr. Bell was the bright hardworking American icon who had accomplished a miracle.  Others would disagree, saying that Mr. Bell and his associates appropriated work not his own manipulating a seriously flawed patent examination process to deprive the true inventor Mr. Elisha Gray.  The particular events are remote and fraught with the bias of time, repetitive cognitive dissonance, legal paperwork, intrigue between Civil War Army buddies and allegations of theft.

Elisha Gray filed a patent application caveat on the same day that Mr. Bell filed his regular patent application.   Gray’s invention was directed to a liquid microphone using variable resistance that permitted the transmission of power through a conductor dipped into a solution.  Thus, sounds could be produced using a diaphragm at another location in the circuit.  It should be understood that the caveat is a legal instrument similar to the modern provisional patent application; it was enacted in the US Patent Act of 1836 so that an inventor can file information on an invention with sufficient enabling information so as to permit one to manufacture the invention so described; but it was not a final application.

Some have suggested that Bell or one of his associates ‘compensated’ patent examiner Zenas Wilber into arbitrarily facilitating the issuance of Mr. Bell’s patent ahead of Mr. Gray.  However, was it so arbitrary you ask?  You see Mr. Bell’s attorney, one Marcellus Bailey, was none other than a Civil War Army friend of the patent examiner (Zenas Fisk Wilber) deciding the case between Mr. Gray and Mr. Bell.  It is further alleged that Mr. Bell or his legal counsel were allowed to see the Gray application and thereby make additions to the record because of this filthy lucre.  The reason this is so is that at that time patents typically had to have a demonstrator model.  Eventhough this restriction had been removed at that time, there were no drawings in the application related to the variable resistance circuit described in the citations below.

Thus, it is believed by some that that from the record that the material of Claim No. 4 of the Bell Patent No. US 174,665 (Bell’s Patent) is wholly deficient in drawings, description and claim language, as originally filed, of the variable resistance and so forth.  Therefore, it is believed by some that the allowable material was ‘inserted’ to steal what was not his.  In fact, the record shows that the material was indeed inserted into the document, that is not controversial, it is admitted by all, but when it was, that is what is important and was in dispute at that time.

Let us repeat that: The reason Claim No. 4 was suspicious it was known and admitted by all parties that this information was inserted after the fact; but exactly when is what was crucial and in dispute.  And what of Mr. Gray?  Well Mr. Gray’s patent caveat application, filed on the same day indeed contained such language and description.  Thus, according to the the theft theory, if Mr. Bell’s was to be processed correctly that missing language had to be inserted!  The Bell Language is shown below:

“Electrical undulations may also be caused by alternately increasing and diminishing the resistance of the circuit, or by alternately increasing and diminishing the power of the battery. The internal resistance of a battery is diminished by bringing the voltage elements nearer together, and increased by placing them farther apart. elements of a battery, therefore, occasions an undulatory action in the voltaic current. The external resistance may also be varied. For instance, let mercury or some other liquid form part of a voltaic circuit, then the more deeply the conducting-wire is immersed in the mercury or other liquid, the less resistance does the liquid offer to the passage of the current. Hence, the vibration of the conducting-wire in mercury or other liquid included in the circuit occasions undulations in the current. The vertical vibrations of the elements of a battery in the liquid in which The reciprocal vibration of the they are immersed produces an undulatory action in the curreut by alternately increasing and diminishing the power of the battery.” 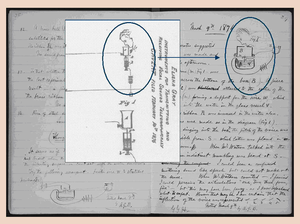 Mr. Bell states that he wrote these words as of January 18, 1876 as he was sending them to his lawyers.  Some speculate that these words were inserted into the application by his lawyers before the filing thereof without Bell’s knowledge.  It is known that Mr. Bell traveled to Washington DC on February 24, 1876.  It is clear that there were no entries in his lab book until he arrived in Boston in early March; the 7th of March to be exact.  Bell’s patent was issued on March 7.    A curious entry is found on March 8, wherein Bell records the results of some trial runs he had with an apparatus drawn therein remarkably similar to Mr. Gray’s caveat.  After a few trial runs Mr. Bell eventually made the device in his drawing work on the 10th of March 1876; this was the scene of that very famous phrase “Watson, come here.”

Bell wrote a letter to Mr. Elisha Gray on March 2, 1877 admitted that Gray’s caveat “had something to do with the vibration of a wire in water and therefore conflicted with my patent.”   In other words, somehow or other Mr. Bell knew about secret information that no one should have known.  Also, the diagram that was inserted into Mr. Bell’s application was surprisingly similar to Mr. Gray’s invention reproduced herein.  And to put the nail into this coffin, Bell testified under oath that he talked about Mr. Gray’s invention with patent examiner Zenas Fisk Wilber.  However, this can be due to normal procedures involved in determining who is the actual inventor or so the theory goes.

We will probably never know with certainty the truth of these events and we should commend to God the souls who have long since past.  However just for your FYI there are others who contributed to the telephone invention:

Unknown Claimants to Invention of the Telephone.

For those who don’t know there are various claimants to the invention of the telephone though their work has not found much traction in the media who loves hero worship to distract the minds of the masses.  Some of these hard working individuals include such luminaries as Charles Grafton Page, Innocenzo Manzetti, Charles Bourseul, Johann Philipp Reis and Antonio Meucci.

The United States Congress eventually passed (2002) resolution No. 260 on the Italian inventor of the telephone Antonio Meucci. Mr. Meucci called his invention a ‘telettrofono’ which would have been quite a mouthful. He went to the American Telegraph company located in the Big Apple so as to obtain backing for the testing of his invention over a two year period. However, after some time past he approached VP Grant of American Telegraph asking for him to return all of his documentation. Unfortunately for Mr. Meucci all of his papers were curiously lost by the Telegraph company. Go figure?