l Engineers.  Mr. Mitchell along with Michael Anderson are co-inventors of a device to filter liquids from various industrial, manufacturing, solid waste and similar processes.  The device is known as the ‘Ecosieve’, that is ‘Eco’ for Ecology and ‘Sieve’ which can be defined as a device having a wire or mesh held in a frame that utilizes it for straining solids from liquids; additionally, a sieve can be thought of as something that separates larger from finer particles, or even for transitioning weaker solids into a paste-like material.

When he first came to Patent CEO, Mr. Mitchell was on a very tight deadline and had only a few weeks to generate and file a very large document and group of imagery. These filings carefully describe how the Ecosieve is designed to process multiple kinds of effluent such as industrial, food processing, waste materials and similar such solid liquid flows.  As discussed above a sieve has a screen or mesh that helps disassociate solid material from the carrier liquids; thus, solids impacting the mesh of the sieve at the entry portal are separated by the mesh in the Ecosieve are removed therefrom for subsequent compression and later disposal or reuse if possible.  Mr. Mitchell’s patent filings include:  (US 20150060341), Europe (EP 3038727), Canada (CA 2922343) and Mexico.  Additionally, Patent CEO Philip Vales also filed an international application using the Patent Cooperation Treaty or PCT. 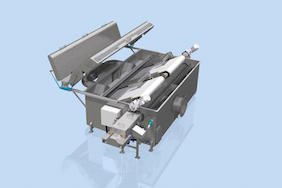 Q: And what does the Eco Sieve do?

A: Well it is a primary filtration device that sieves waste water and as you can see here waste water comes in and runs through our patented sieve device and flows out the device.

Q: …What kind of materials do you guys clean out with the EcoSieve?

A: Well any kind of suspended … that might be in a water stream. In Municipal waste, that would be municipal solid waste… And then any additional applications it could be anything from grains to laundry lint… to a…

A: Any corn, methanol production facility will typically have spent grains or fermentation process such as alcohol like beer brewery or wine making all kind of things.

Mr. Mitchell goes on to discuss how the Ecosieve is being demonstrated in various industrial locations within the United States in municipal and industrial applications.  Further he provides a look at the current state his IP which Patent CEO filed for him in various locations including Europe, Canada, Mexico and an international application in the Patent Cooperation Treaty.  It should be understood that the PCT is not an international patent, per se, rather the PCT is a system by which signatory nations cooperate to defray costs of filing a local national or regional patent applications for up to 30 months and even sometimes 31 months.

“We have been very happy with the work so far that PatentCEO has done for us.”

“We are very happy about it.

Send us Info About Your Concept
C